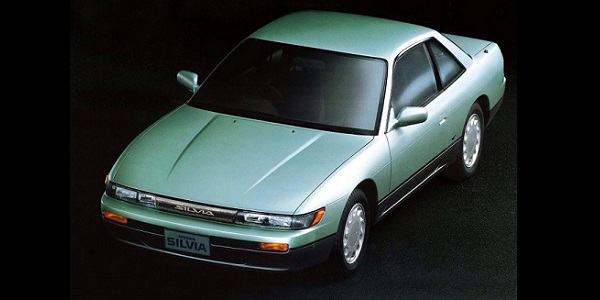 The fifth- generation Silvia (S13) was released in May of 1988.   The S13 was a beautifully shaped coupe and became very popular, especially among the youth market.  The engine mounted in the original model was 1.8-liter “CA18” DOHC, with a naturally aspirated version producing 133 horsepower.  This engine was mounted in the “J’s” and “Q’s”, and a turbo-charged version of 172 horsepower was mounted in the “K’s”.  The top-of-the-line K's was also equipped with the S-pack (rear spoiler, projector headlights, 195/60R15 tires, etc.) which accentuated the sporty character of the car.  The three model names were derived from the three court cards: King (K), Queen (Q), and Jack (J).  In 1991 in Japan, all the engines were changed to 2-liter “SR20” DOHC to enhance the power.

This car emphasized beauty and the driving experience with numerous advanced technologies, such as the multilink rear suspension and HICAS-II 4-wheel steering system (as an option).